Find me on:
LinkedIn

Zillow + Conversations are the Key to Success for #FastAgent Kenny Truong 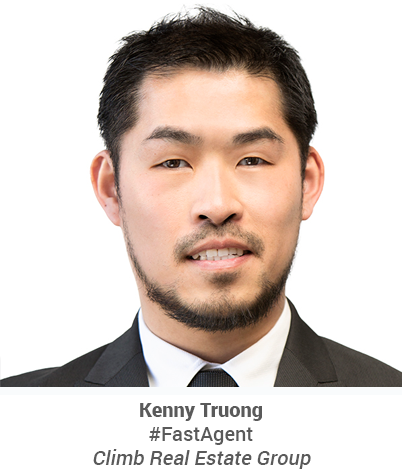 Kenny didn't start out in real estate - but rather fell into it when a colleague identified him as a natural fit for the space. Today, he works for Climb Real Estate and is a top agent in his area. Kenny uses both Zillow and Conversations to power his business.

Climb Real Estate Group was founded in 2010 on a single vision: to redefine residential real estate. Climb Real Estate has made it their goal to innovate the home buying and selling experience, empower their agents and to create sustainable home ownership that builds Bay Area communities. The company has five Bay Area locations and has grown over 1,000% in 4 years with over $1.6 billion in sales since inception.

Kenny became a full time real estate agent in September of 2010 and closed his first sale in March of the next year. He quickly realized that he had the drive to succeed in the industry - and he was more than willing to put in the hardwork. To stand apart from the competition, Kenny branded himself as #FastAgent and built his business model around focusing on delivery speedy service to all his leads and clients - both online and offline. His branding decision paid off - several months after starting his real estate career, Kenny had become one of the top performing agents in his area.

In addition to his focus on speedy service, Kenny decided to invest in the Zillow Premier Agent program. He purchased several zip codes in his area and quickly started seeing an influx in relevant home shopper leads. To keep up with the increase while maintaining his #FastAgent reputation, Kenny signed up with Conversations. He was quickly wowed by Converstion's intelligent automation.

Today, Conversations is an integral and extremely valuable part of Kenny's business. He uses the lead engagement and conversion software to intelligently manage follow-up and nurture his leads until he's able to personally connect. Since he started using the system, his conversion rates have increased tremendously. Kenny is regularly recommending Conversations to other agents because he's been so impressed with the results.

Brand new leads are in the first step of their buyer's journey known as the awareness stage. At this point, a lead is nowhere near ready to choose an agent. In fact, they haven’t even decided if it makes sense to commit to buying yet. Kenny knows this - and he trusts Conversations to help him make meaningful connections with these leads that will help nurture them towards a point where they are ready to connect with him in person. Conversations does this by providing ongoing messages with relevant information that is selected based on what the lead is searching for. These messages could cover anything from additional properties that meet the lead's search criteria to price drop notifications for a favorite property.

"Using Conversations is like having an assistant that works for me 24/7.”

Click here to read the rest of Kenny's story

Ready to see how Conversations can help you

Download and use this free ebook to discover 57 online lead generation ideas to use in 2023!